No doubt you’ve heard about this wonderful new feature accounting packages like MYOB are now offering – Direct Bank Feeds into your accounts. It sounds like a good idea, right? You authorise them to talk directly to your bank and grab all your transactions on a regular basis and plug them directly into your accounting software, which of course means you don’t have to bother manually importing those records, yourself.

It sounds like it is saving you time – bank reconciliations can become a breeze and it can even match up your bank records against payment records in your ledger, usually requiring no more than a tick of approval that they found the right record. That’s obviously a lot easier than going through those records and matching them up yourself – it’s a no-brainer!

When was the last time you actually did a bank reconciliation? Could you explain to a child why it is actually useful to do them? If you have an accounting background, I’m sure you have been taught the theory behind them and can rattle off a few ideas about “overdrafts” and bouncing cheques and so on… Maybe even the idea that your bank might make a mistake or someone could be stealing from you!

A good business manager understands that those kinds of risks are basically in the same category as being present during a bank robbery or locking your keys in the car. Sure, they’re not entirely impossible but they are far less likely to happen, in the modern age.

The problem is that those accounting principles you learned were developed in a far more industrial age where the word “computer” was used to describe someone you employed to do sums, using logarithms and a slide-rule. 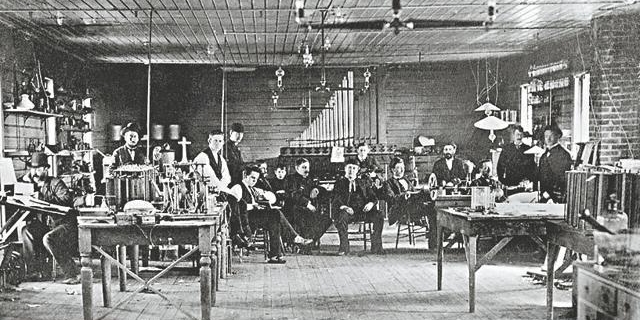 The traditional accounting methods you are probably employing were developed in the early 1900’s to support companies with large batch production and high labour costs and inventory levels, not the plethora of small businesses which are so prevalent today. Worse still, traditional accounting reports were developed to present an accurate view of a company to outsiders – their purpose was to give someone an idea of how much your company was “worth”, rather than help you actually manage the business…

Skip to present day and even the most “cutting-edge” accounting products for small business, using the latest cloud-based technologies and modern design trends are still being created by unimaginative accountants using those same outdated Depression-Era methods and principles.

Remember where failure to adapt and “accounting irregularities” can lead!

If you can accept that running your business does not have to involve regularly trawling through detailed bank records then suddenly the idea of filling up your accounts with them, thanks to a drip feed that you’ve set up directly into the main artery of your bank account, starts to not look like such a clever idea, after all…

Sterling has extensive experience in important sounding stuff and something about his opinions and blablabla are you seriously reading this right now?